The STELLOPT code is designed to optimize 3D MHD equilibria for a set of target physics parameters encompassing stellarator design and 3D equilibrium reconstruction. It is currently interfaced to the VMEC 3D equilibrium solver.

STELLOPT is currently hosted on the Princeton University’s GitHub repository.

The STELLOPT code can be thought of as a multi-dimensional non-linear curve fitting algorithm. The curve to which a fit is sought is parameterized by a set of target parameters which themselves may be MHD equilibrium quantities (beta, aspect ratio, etc.) or non-linear functions of the equilibrium itself (stability, particle transport, etc). The function used to fit these targets is the MHD equilibrium itself. Here the input parameters to the equilibrium serve as a set of coefficients parameterizing our non-linear fit function. The quality of fit is determined by the Chi-squared metric $$ \chi_i^2=\frac{\left(f_i^{target}-f_i^{equilbria}\right)^2 }{\sigma_i^2} .$$ The sigma here represents the tolerance of the target value. The goal of the code is to minimize the total chi-squared value. STELLOPT natively provides a few optimization algorithms: a modified Levenberg-Marquardt algorithm, genetic algorithm, and differential evolution. Over 30 more optimization algorithms are available if you build STELLOPT with the MANGO library, discussed in more detail here. 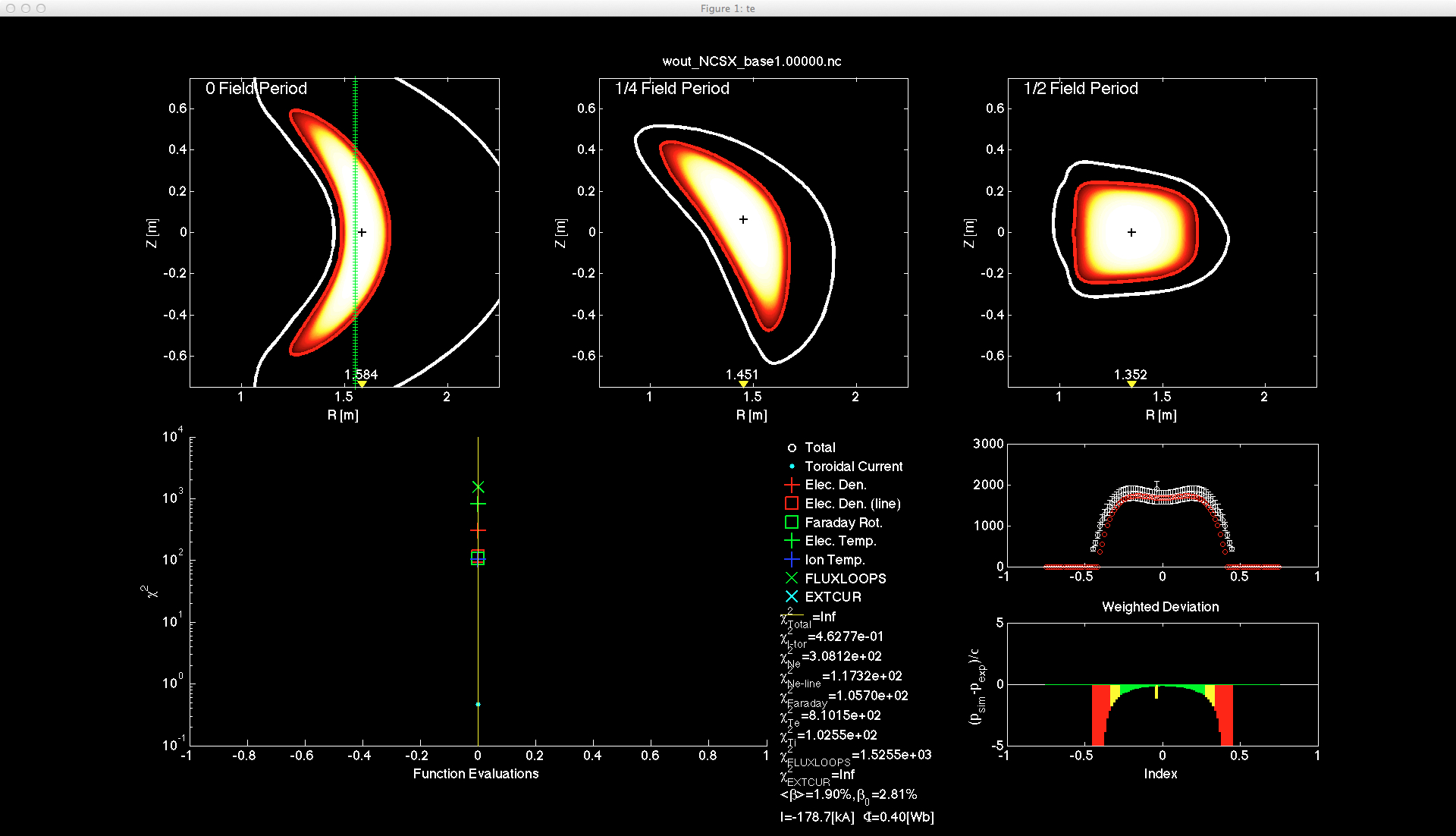 The user specifies which equilibrium input values to vary independently of the targets. Additionally, profiles for Ne, Te, and Ti (as functions of toroidal flux) have been added to STELLOPT. If utilized these profiles are used to calculate the equilibrium total pressure before a calculation is preformed. The code is capable of targeting a number of different parameters by either directly evaluating the equilibrium or calling subcodes once an equilibrium is found. The following list outlines the currently available targets:

The STELLOPT code takes an input file which contains all the input namelists necessary to run the equilibrium code, STELLOPT, and any additional codes called by the optimizer. The STELLOPT code itself requires an OPTIMUM namelist which contains the runtime parameters for the code, specifies which input variables to vary, any additional profiles, and the target parameters to match.

The STELLOPT routine is designed to be run on a multi-processor machine or cluster. In general, it should be executed via a call to mpirun (most likely inside a PBS script). The call should take the form:

Here $NPROCS is the number of processors being requested and $runid is the suffix assigned to the input file. Upon execution STELLOPT will create a working directory entitled stellopt_$runid where $runid is the value passed to it from the command line. All work and final output is preformed in this directory. Optional arguments which control the code behavior are:

The STELLOPT code will produce many files so it is suggested that each run be kept in a separate directory. A stereotypical run looks something like:

Once a run has completed the code will output a stellopt.ext file, and a input.ext_min file. The _min file contains an equilibrium input file corresponding to the best fit as found by STELLOPT. The stellopt. file contains an iteration by iteration analysis of the fit to the target parameters. The file begins with a version string (VERSION 2.65). Each iteration is demarked by an iteration line (ITER XXXX). Each target type is then noted by line indicating a type, the number of target values, and the number of output values (TYPE 3 1). Immediately following that line is a line of text indicating the value in each column.

Additionally, many working files denoted by _optXX are produced by STELLOPT. These files may be removed once a run has completed. If the user has elected to keep minimum states as the code iterated, various files produced by the equilibrium calculation, and other codes will be kept with an iteration number appended to their name. In this way a step by step analysis of the optimization may be evaluated. The optimization routines may themselves create output files.

The final output of the STELLOPT routine is a combination of STELLOPT files, VMEC files, and the output files of the physics modules invoked durring the run.

Optimization of an NCSX-like configuration