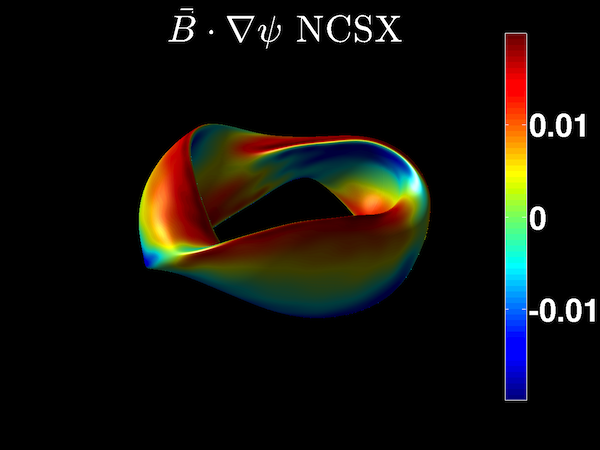 The BNORM code calculates the Fourier coefficients of the magnetic field normal to the VMEC surface.

It achieves this by utilizing the covariant magnetic field on the VMEC surface to construct a surface current. It creates input files for the NESCOIL program.

The purpose of this code is to calculate the Fourier components of outward normal components of the magnetic field. This information is passed to the NESCOIL routine. The code achieves this by first using the covariant magnetic field to construct a surface current density

BNORM is a component of the STELLOPT suite of codes.

To run BNORM with a given input file simply pass the name of the VMEC output file to BNORM like so (input file named input.test):

The code can take one optional parameter, the coil separation in generalized units.

You can also run BNORM with customized resolutions, like

Especially when the default Fourier resolutions are not large enough. mf>=MPOL-1 and nf>=NTOR should be satisfied.

In the above commands, we’ve redirected screen output (trapping error messages) to ‘bnorm_log.test’ and put the process in the background.

The BNORM code outputs two files the ‘bnorm.suffix’ file and ‘nescin.suffix’ file (where suffix is the suffix of the VMEC ‘wout’ file). The first file contains the Fourier coefficients of the normal B-Field. The second file is the input file for the NESCOIL code.

The ‘bnorm’ file has a list of the m, n, and bnormal (sine) Fourier coefficients. For information on the ‘nescin’ file please see the NESCOIL page.

After running VMEC, simply call the code with the VMEC ‘wout’ file as it’s input parameter as explained above. This should produce the ‘bnorm’ and ‘nescin’ files.